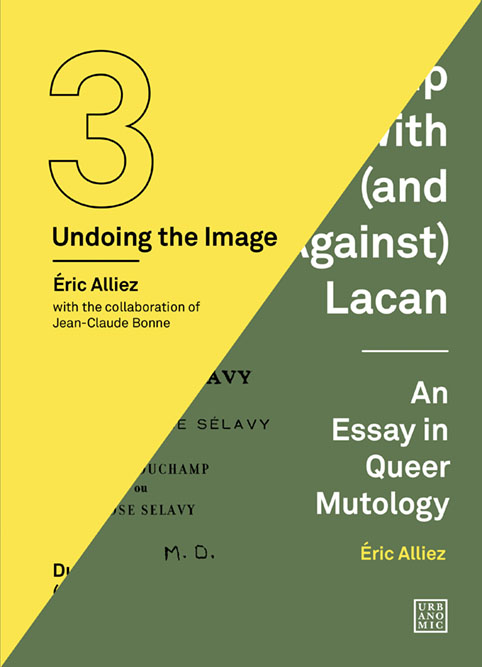 Although ideally there are to be three moments, the first act itself unfolds in 3 Standard Stoppages [3 Stoppages-étalon] (1913–1914) which destallionise [désétalonne] the principle of non-contradiction. It is fundamental that 2=3, or rather (to borrow a word from Deleuze), it is effondamental, ungrounding, in so far as 3 qua excessive subversion of 2 (the cipher of contradiction) is all that is needed in order for chance to impose its antiscientific and antiphilosophical law. That is, if we follow Alain Badiou in defining philosophy (from a ‘classical’ Lacanian point of view) as the subversion of the 3 by the 2 en route to the 1 (the dialectic of ‘the One is [l’Un est]’). Consequently, what may seem like ‘a ruthless satire of Hegelian dialectic’ would for us have the merit of placing Duchamp’s Anti-Science in line with an Anti-Philosophy of the field [du champ]. For Duchamp, Science and Philosophy are the two variants of the Discourse of the Master, who cannot claim Leonardo as one of his own. The whole interest of the operation of 3 Standard Stoppages lies in the diagrammatic tension that it constructs, and obliges one to think, as a play between the received in-forming form of the unit of length and the deformation/disinformation to which it is subjected purely by virtue of a development/disenvelopment of ‘possibles’ in the course of a disparation of the identical. The One that is no longer equal to itself (or identical to its principle: the principle of identity) is doubled not into 2 but into 3, the Duchampian number of unbound multiplicity, in the sense that it comes down to denying that ‘there is one [existe un]’ as a direct conse
quence of the ‘disparate’ (to use Duchamp’s judiciously chosen word); its ‘calibration’ invades the ‘identicity’ of ‘2 forms embedded in the same mould (?) different from one another by an infrathin separative value’ which is also a ‘constant dissociation’ in
troduced in M.D.’s principle of cut identicity. In 1968, the year of his death, Duchamp writes 3 times ‘éros c’est la vie / Rrose Sélavy’ on the cover of Arturo Schwarz’s great work on the genesis of The Bride Stripped Bare by Her Bachelors, Even.

This 3, the number of the indefinite and of imparity, is the pure perversion of all trinities, from which we must be careful not to exclude the ‘Père-version’ or ‘Turning-to ward-the-father [Version-vers-le-père]’ to which is attached the trinitarian knot haunted by the 2 and by Lacan’s ‘non-dupes errent’…