Urbanomic
Chapter
The Only Possible Project

The Only Possible Project

Construction Site, On the Relations Between Bodies and Deductive Thinking
X-Risk, Timeline 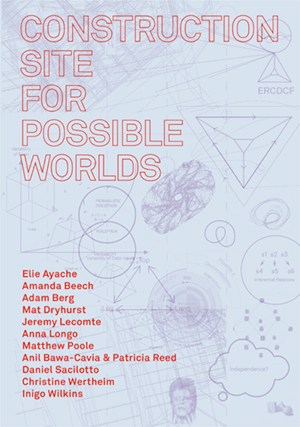 Down with the world. It is no longer a question of finding an alternative to the world, but of bringing it down, together with any vision of an alternative. The world is so exposed to the light of capital, so heavily surveyed and surveilled by its searchlights, that any alternative construction, projected under the same light, cannot really qualify as an alternative. One even wonders whether possibility as such, as when we talk of ‘possible worlds’ and of other ways that the world ‘could possibly be’, is not itself the light that must first be turned off.

Speculation, or trying to mirror this world beyond its empirical evidence, trying to think what this world may possibly be made of in order to imagine other ways it can possibly be, is first and foremost a question of light. For this reason, speculation in this sense may not be the right way to construct other worlds. We are sick and tired of alternatives that seem to vary from the actual world only for us to realise that they are mere speculations, configurations of light coming from the present world but reflected differently, alternative possible worlds that only extend the range of possibility emanating from the same source.

It is not for another possible world that we should be looking, but for an alternative to possibility as such. If possibility is only a decoy, something that makes us feel confident we have changed the world only to better entrap us and recuperate us into that same world, then it is possibility as such, the very instrument of confinement within the present world (that which gives us the same under the guise of the different), that must be changed. And to make this change more efficient, it ought to take place literally without leaving the present world. Rather than changing the world, it is much more powerful to change that which makes us think we have changed the world when in fact we have not, i.e. possibility as such.…