Urbanomic
Chapter
‘Hurt Me! No, Not Like That!’: A Conversation with Rhea Myers

‘Hurt Me! No, Not Like That!’: A Conversation with Rhea Myers 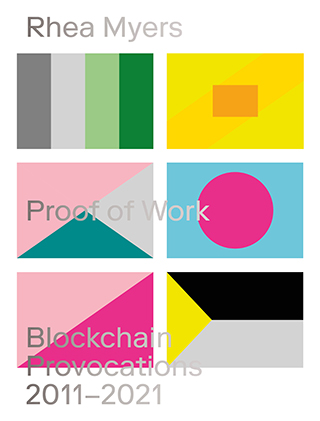 Maya B. Kronic
Your work is obviously about more than technology. It’s full of formulations like ‘Blockchain Aesthetics’ and ‘Blockchain Poetics’, and I was struck by your description of Bitcoin as a ‘development in cyberculture’ rather than just a technology. Many of your works exhibit a sensitivity to the charm and energy of the cultural scenes that assemble around technological platforms and indeed play a part in their growth. Dogecoin, Ethereum, Rare Pepes, these are all instances of the collective charisma that can burgeon around an online project, even something as apparently nakedly financial as a cryptocurrency. In an article that you cite in ‘Blockchain Poetics’, Brett Scott argues that a rational account of the emergence of money is always inadequate because, in order for exchangeable objects to accrue social value, they have to already be imbued with some kind of cultural energy, something akin to artistic value.

Rhea Myers
Prior to Bitcoin I was looking at bronies, and before that at more general internet culture, I just immerse myself in these things. I describe culture as Dogecoin’s secret sauce, because it didn’t have a particularly better algorithm than Bitcoin, although it is slightly faster. The thing that was different was its community’s Bill-and-Ted-esque spirit of excellence and charity and support and welcoming and inclusion. Something which I assume was calculated to begin with, but as far as you could tell, was pure and in earnest. Even today, if you dropped the Bitcoin and Ethereum and Doge communities in a barren wasteland somewhere and came back in two years time, I know which one I would put my money on still having any kind of functioning social fabric. That in part is what ‘Bad Shibe’ is about. Unfortunately the social is all but invisible to the crypto bros who believe that conventions just appear and communities just spring up. That wilful ignorance of the social labour of reproducing crypto culture is just fascinating, not to mention that it’s transparently and ridiculously gendered too. So looking at those more social aspects does give you a critical way into the culture. And gaps in the culture give you clawholds on the sloping glass roof of the nice happy libertarian-to-VC pipeline of crypto technology.

MBK The word ‘currency’ understood not just in terms of money but also as involving a cultural current, a nowness which has a social and emotional dimension.

RM Yes, which allows the bootstrapping of a socially valued currency—and makes FOMO, the fear of missing out (e.g. on a token drop), the original source of value!…