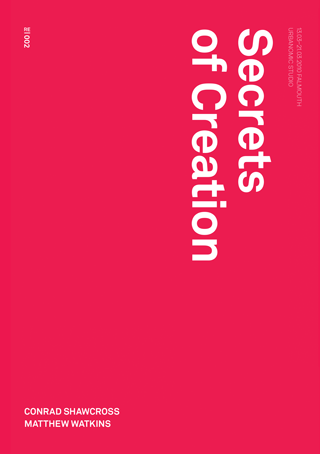 As this publication is intended as a document of research in progress, it was important to present here the dialogue recorded during the period of the residency project, which, even when selectively transcribed, yielded nearly eighty thousand words. The editorial process reflected the complex of meanings around ‘Redactions’ recited at the beginning of each publication in this series. As always I made it my editorial prerogative to compensate for the occasional opacity, hesitations, and infelicities of spontaneous dialogue, and to streamline and enhance the text where it seemed necessary.
Especially in terms of Matthew’s explanation of his work, there were returns to the same topics across the space of the week, and expositions of the underlying mathematics did not appear in logical order of priority. Perhaps these passages could have benefited from being drawn together and compacted. But it was more important to convey a sense of the trajectories of these various threads of thought, from the theoretical to the technical to the pragmatic, as they made their tangled way through the week, being dropped only to be picked up again later as the group tried to find a way to twist them together.
With few exceptions, then, all of the transcribed parts have been left in sequential order, digressions and lateral drifts included. The sometimes comical juxtapositions to which this gives rise are not an artefact of editing but were part and parcel of the process itself. The halting, probing, frustrated movement of research is represented without attempting to smooth over or hide the marked shifts that occurred during the week, between enthusiasm, disorientation, longueurs, fraught meta-commentary on the project’s progress, waves of activity, studious construction, and outbursts of collective delirium.…