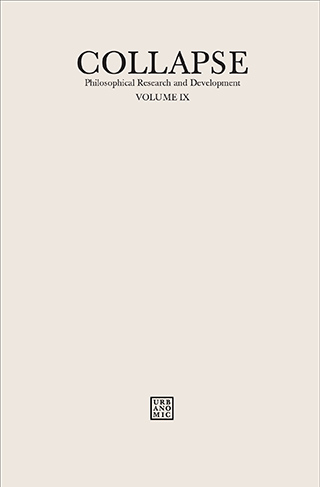 The singular nature of the olfactory sense, its diffuse yet arresting nature, its intimate link with memory, and the resistance of scent to linguistic description, has long been celebrated in literature and the arts. Smell continues to be the least understood sense, even if some of its secrets are now being unveiled by scientific research. But there is a profession which has for centuries dedicated itself to stimulating, understanding, manipulating, mapping out, describing, and understanding the logic of the olfactory.

Volume IX of Collapse: Philosophical Research and Development will present a trans-disciplinary investigation of the logic of scents by focussing on the history and contemporary practice of the art and science of fragrance, making a case for the crucial philosophical interest of a practice that is compelled to continually navigate between the registers of the unconscious, the phenomenological, the material, the sensible, and the chemical—to speak in many tongues rather than make any final decision as to the nature of its object; and which uncovers a logic connecting the imaginary to the molecular: an art where abstracted desire meets industrial synthesis, where language, memory, and animal response enter into dialogue with the research laboratory and the luxury goods market.

Contributions to the volume will include theoretical and speculative texts from philosophers, theorists, and historians, interviews with experienced and innovative perfumers, chemists, and scientists inquiring into olfaction at the evolutionary, molecular, and neurological level; and contributions from artists and designers working with scent.